The BroadForward Next Generation SS7 Firewall (SS7FW) is a converged software solution which protects 2G and 3G networks against against potential attacks, unauthorized senders, malformed messages, overload situations and much more. The BroadForward SS7FW supports the relevant FS.11 GSMA guidelines for Signaling Firewalls of the SS7 protocol.

Firewall functionality across access networks
There is a growing realization that the traditional approach to secure signaling per access technology and protocol no longer suffices. Many security products today are designed on the assumption that securing a single protocol technology is sufficient. SS7 is still the dominant protocol technology in use, and although Diameter adoption is growing, 5G will introduce HTTP/2 to the Mobile core. Never before were Mobile networks so vulnerable to attacks from the connected world. It is clear the telecoms industry needs to rethink how to deal with these new threats. Mobile network technologies and the protocols that support them are evolving rapidly and so are the criminals looking for ways to exploit them. In the design of 2G/3G networks, which rely on SS7 signaling, security wasn’t a high priority. Back then there was no foresight about how pervasive mobile would become and what type of security challenges hyper-connectivity would bring. Moreover, today our daily life depends on reliable (mobile) connectivity, for messaging, healthcare, banking, social interaction and much, much more. We have reached phenomenal penetration of mobile subscribers that rely on high profile services, and hyper-connectivity for devices is set to grow exponentially (IoT).

Next Generation SS7 Firewall
According to the GSMA (source: GSMA Mobile Economy 2020) since 2015, an additional 900 million people have been covered by a 3G network (in 2020 90% global coverage). The continued importance of SS7 for global telecommunications should not be underestimated. The BroadForward Next Generation SS7 Firewall (BroadForward SS7FW) is a unique 100% software designed, intelligent signaling solution. 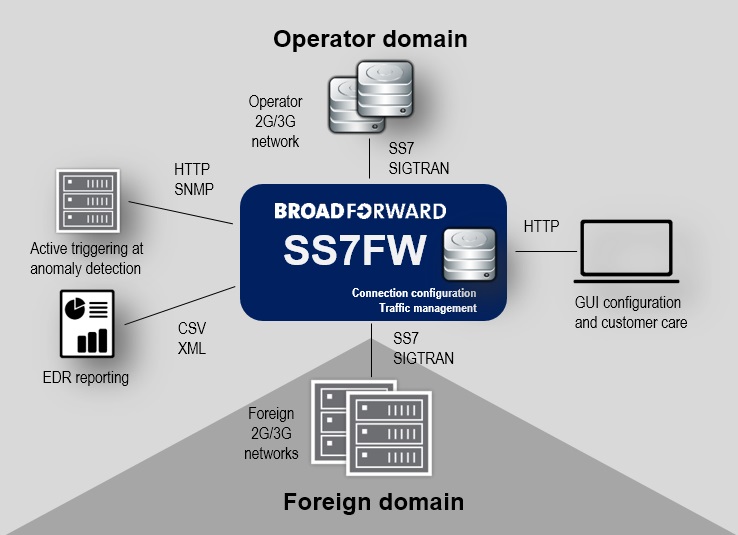 The BroadForward SS7FW provides operators with an extensive set of tools offering unrivalled flexibility to integrate with systems across networks, adapt and deal with attacks, unauthorized senders, malformed messages, overload situations and much more.

GSMA FS.11 categories
The GSMA regularly releases updates to its guidelines for “SS7 Interconnect Security” also known as the FS.11 recommendations. In general these recommendations define the following three categories:

Screening, filtering and SMS Firewall
The BroadForward SS7 Firewall supports message screening and filtering for SCCP, TCAP, INAP and MAP messages according to FS.11. In addition, for SMS fraud prevention the BroadForward SS7FW can be extended with SMS anti-fraud firewall rules to prevent:

Converged Firewall and the transition to 5G
The BroadForward SS7FW is the first single-engine software solution designed to work across signaling protocols and network technologies. The BroadForward SS7FW not only secures 2G and 3G networks but also provides service providers with a path to gradual migration to a converged security architecture across Diameter, SS7 and HTTP – required for 5G signaling operations. Firewall technology needs to be able to secure services across 2G/3G, 4G and 5G for many years to come. The GSMA points out that “with even more entities gaining access to core networks in the 5G era (due to network slicing and other features), we can expect that the attackers active on 2G, 3G and 4G will seek to execute the same types of attacks over 5G“. The BroadForward converged software architecture is designed assuming a threat to one domain to be a threat to all domains.

High capacity, high performant solution
Using standard (commercially off-the-shelf) servers, virtual machines or cloud based (Containerized) deployment technologies, the BroadForward SS7 Firewall supports 10,000’s of transactions per second on a single machine. It supports scaling up and scaling out, without any technical limitations. The BroadForward SS7FW stateful storage function (for advanced location based filtering) is multi-node aware, using a distributed storage model. In case of a node or site failure, the data is processed by the redundant (other) node or site without any interruption or loss of volatile location data.

Hardware-agnostic solution, supporting virtualized deployments
The BroadForward SS7FW runs on any off-the-shelf hardware or in a virtualized environment. It is a 100% software based solution, supporting virtualization and cloud deployment (VMware, KVM, OpenStack, Amazon etc.) as well as containerized application deployment (Docker, Kubernetes). The SS7FW does not rely on specialist hardware or proprietary operating systems. The ability to deploy the BroadForward SS7FW on a common (shared) platform (e.g. with the BroadForward Diameter Firewall) supports operators and vendors in migrating away from proprietary based appliance systems to a standards based, hardware agnostic, software only, infrastructure.

Discover more about the world’s most advanced signaling solutions!

“We are very happy with your products for many many years in a row now and you’ve never let us down”
“The platform is extremely flexible, rock solid and occasional issues are always handled swiftly by the team”
“You guys have a great product with the DRA, we’ve been able to create some pretty complex flows and routing rules”
“We’ve deployed the BroadForward multi-technology signaling platform, enabling advanced control in our global IoT services network, as well as unrivaled flexibility to meet specific enterprise demands”
“BFX is a great product. We have been using them for years. Extremely reliable. Expecting nothing but the best from them. Great choice”
“Working with the BF team always has been a great pleasure with very satisfying results”
“BFX and more importantly, the BroadForward team is a key aspect of our success”
“We are really enjoying the platform”
“Nimble and agile solutions are the future of this industry, and for once, we have one”
“The more I use BFX… the more I am liking it”
“Very good technology, I am impressed”
“Miles ahead of the competition”
“This is the best product, this is the next generation”
“Working with BroadForward is like a breath of fresh air”
“Our management is thrilled about the success of the migration”
“I really, really like your product”
“By far the most advanced and flexible DSC seen so far”
“Truly amazing functionality”
“Enabling DRA function in network in just a few hours”
“Don’t need any scripting”
“Really cool product”
“Winning product”
“Unique capability in our network”
“Amazingly powerful product”
“Designed to provide maximum agility”
“Remarkable new technology”
“You provide the glue”
“Structurally speeds up time-to-market for new services”

Subscribe to our Newsletter to get regular product and industry updates